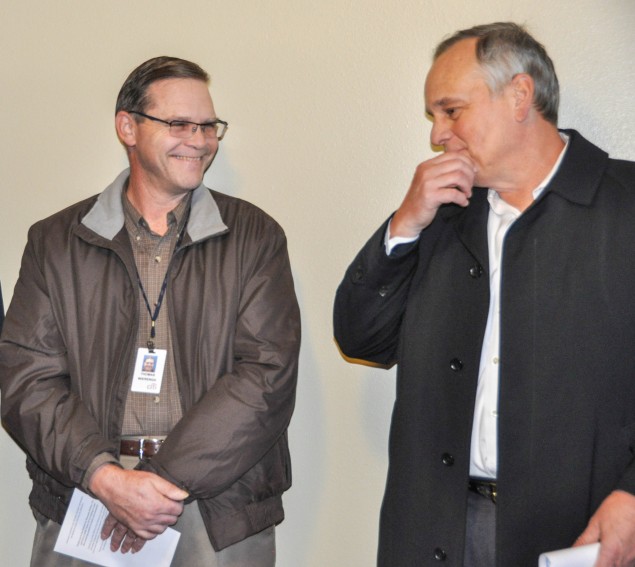 “I just volunteer,” he said with a shy smile. That’s not exactly what you expect to hear from someone who received two volunteer awards in one year! Tom Wierenga, pictured on the left, received the Citibank – SD Volunteer of the Year award from his employer, and the Supporter of the Year award at the Habitat for Humanity – South Dakota annual banquet.  Tom and his wife, Marian, are prime examples of the kind of caring, giving folks who make Habitat work. You will often find them in the audience, but you will never see them clamoring for attention.

In 2004, you would have found Tom in Mexico. He had the privilege of joining the Jimmy and Rosalyn Carter Work Project in Puebla, Mexico. Citibank sponsored this life-changing trip.

We are honored to recognize and thank Tom Wierenga for his long-time dedication to the mission of Habitat. In his 15 (documented) years with Habitat Sioux Falls he has:

• Supervised builds of 14 Habitat homes sponsored by his employer, Citibank, SD. In that role Tom has organized, recruited, oriented, led, and taught countless Citi employees in the art of construction;
• Served on the Habitat Construction Advisory Committee, working monthly among volunteers to advise and assist with construction-related issues. For three of those years, he chaired the committee;
• Served on the Habitat Board of Directors through the two-term limit (six years). His hands-on knowledge of how and why things are done, his long-time experience, and his innate solid judgment and common sense made him a valuable barometer for the Board. And now, he’s returning to the Habitat Sioux Falls Board!
• Been our solid liaison to Citi, whose corporate commitment to affordable housing and support of community partnerships shines through people like Tom. 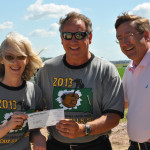 Our affiliate has been addressing housing needs in our community since 1990. We have built and/or renovated 121 homes, offered minimal home repairs, and provided home owner education classes in conjunction with many community partners, amazing volunteers (1,600 last year) and, of course, God’s grace. A strong board of directors is a major asset. As President of the Habitat Board of Directors from 2010 – 2014, Evan Ingebrigtson’s leadership has brought many bonuses to our affiliate. He has led with humor, intelligence, passion for the Habitat mission, and good common sense. He is a consensus builder and has the friendly and open respect of his peers on the Board. Through his efforts, Habitat has gained:

Lot acquisitions in many “new to Habitat” neighborhoods.

Linkage Through Evan’s connections he has brought regional build project opportunities to our community, creating enthusiasm, awareness, more volunteers, and media attention. In 2010 alone, a local “Blitz Build” project accomplished the construction of three homes in 9 days, with a nationwide group of volunteers who came to our community to build! In 2013, Evan was instrumental in securing a building with FHLB funding and volunteers.

Financial Growth The level of bank giving to Habitat, the number of banks participating with Habitat, and the range of financial services available to Habitat have increased under Evan’s leadership. Corporate giving is up by 35% in the last two years.

Vision Evan led the Board through its visioning process, which resulted in our 2014 $1.4 million capital campaign, Breaking New Ground, to expand our ReStore and warehouse and expand our capacity to build. We are excited to break ground on our existing campus on October 15!

Evan Ingebrigtson is a good person doing great things as a volunteer leader for Habitat for Humanity. He has “raised the bar” and brought our affiliate to a new level of community awareness. And, he and wife, Pat McGee, participated in a Jimmy Carter Build in Viet Nam in 2009.

Evan Ingebrigtson pictured with Mayor Mike Huether and volunteers at the FHLB Build on June 29, 2013