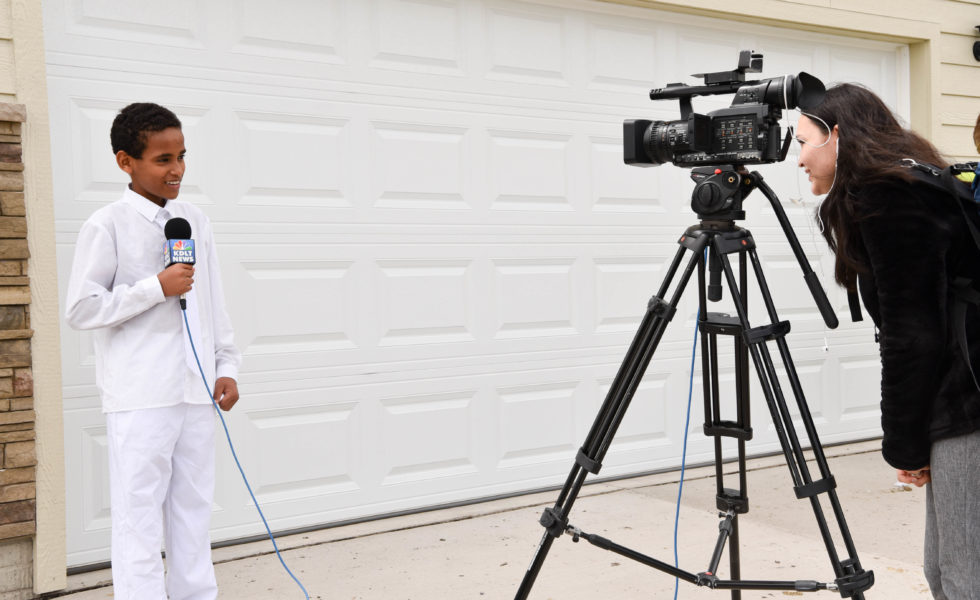 Questions from the media can be directed to Eric Fjerestad, Community Engagement Director, via email or 605-274-6291. Thank you for the opportunity to share our story!

Nothing But Smiles for New Homeowners via Keloland, November 18, 2022

Habitat for Humanity back to work and looking for volunteers via KELOLAND. June 11, 2020

The outbreak of COVID-19 caused a critical shortage of personal protective equipment across the country. Thanks to a generous donation from Habitat, Lifescape employees now have a more protection to combat the spreading epidemic. March 28, 2020

Linda Watts, our very first homeowner, still lives in her Habitat house and shared her story on KELO in celebration of our 30th anniversary. September 20, 2019.

Vanessa Gomez with KSFY News donated her time on Celebrity Volunteer Day and did a live interview with the homeowner’s daughter to celebrate our 30th anniversary. September 18, 2019.

Marina Perets grew up in one of our first Habitat houses and shared her story on KELOLAND Living in celebration of our 30th anniversary. September 17, 2019.

Sioux Falls Ford Lincoln makes first ever and very generous donation of $30,000, which will help build a house in Harrisburg. KSFY. July 8, 2019.

The Sioux Falls Habitat Youth Professionals’ Dream Shed is almost done and thanks to KELO for checking it out. June 26, 2019.

Hosting 70 volunteers from Grace United Methodist Church of Naperville will be one of the highlights of our summer. KELO. June 12, 2019.

Collegiate Challenge has returned to Sioux Falls! KSFY and KELO. May 31, 2019.

The dedication of our 160th house and the introduction of a Bank Build made the Argus Leader. Sioux Falls Business Journal. May 30, 2019.

SiouxFalls.Business featured our first ever Bank Build. May 28, 2019.

We have participated in Women Build Day since its inception in 2008. Keloland Living. May 3, 2019.

Habitat art auction featured on In the Moment with Lori Walsh on SD Public Broadcasting. April 17, 2019.

Covering a house UNgroundbreaking in February doesn’t happen every day on KELO! February 26, 2019.

The elementary school buddy benches got painted by the New Tech High students! KSFY joined us for phase two of this community project. February 15, 2019.

High school students built buddy benches for elementary schools with Habitat! Buddy benches are where grade schoolers can sit at recess for a friend to find them and play. Here is KELO’s story and KSFY’s.

Sanford Health is tearing down Medical Building 1 and donated all of the cabinets and such to our ReStore. August 29, 2018.

KELO coverage of the dedication of our first Art Auction House. May 18, 2018.

Thanks to the KSFY Morning Show for coming over and spotlighting our art auction! April 17, 2018.

We talked about our fifth annual art auction on KELOLAND Living. April 2, 2018.

Etc. For Her featured our ReStorAtion Art Auction on pages 24-25 of the April issue.

We had the privilege of hosting Wells Fargo and Governor Daugaard for the down payment assistance program announcement! KELO and KSFY  covered the event. November 30, 2017.

KELO helped us build this home and made it to the dedication. November 7, 2017.

We use BuildBlock ICF and they featured us in their blog! June, 2017.

Thank you City of Sioux Falls for including us in your Compassionate SF series! June 1, 2017

We were featured in an article by Habitat International about volunteering! May 9, 2017.

Who knew getting up early to be on the KSFY Morning Show could be so fun! We talked about the upcoming ReStorAtion Art Auction. April 18, 2017.

The ReStorAtion Art Auction was featured on Inside KELOLAND. April 16, 2017.

KSFY News visited our ReStore for live spots during the morning show! January 23, 2017.

Our family selection process was featured on Eye On KELOLAND. January 22, 2017.

KSFY features the ReStore during their morning show! December 6, 2016.

KSFY donates office equipment to ReStore and features a story about it. November 29, 2016.

Navy Week made the Argus when Sailors worked with Habitat Sioux Falls. July 20, 2016.

Eide Bailly spent their Community Day with Habitat Sioux Falls for the sixth year in a row! Thanks to KELO for the quality coverage. July 14, 2016.

Groundbreaking with Abrehet and her children, KSFY coverage. July 12, 2016.

KELO made another visit to Habitat land and covered our Kum & Go House dedication. June 28, 2016.

Our participation in National Women Build Week on KSFY. April 30, 2016.

The dedication of the Pope Francis House made KELO. April 4, 2016.

We spent Saturday morning, Sept 19, at the Helpline Center volunteer fair, as did the Argus Leader. September 19, 2015.

We dedicated four homes on one street in one day. Block party!! Thanks to the Argus Leader for the coverage. December 30, 2014.

The Argus wrote a nice feature about the kick-off of our construction season. May 22, 2014.

Our art auction made another publication! It’s in the February-March issue of Sioux Falls Woman on pages 18 and 19.

Etc For Her wrote about our upcoming ReStorAtion Art Auction in the January issue. The article can be found on pages 68 -71.

Augustana College featured our 2013 partner family, Sarah Domangue and her son Jaiden, in an article for their campus paper. Nov. 27, 2013.

The local paper in Canton featured an article about the ground breaking of the 4th Adams Thermal home in three years. August 16, 2013.