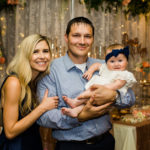 Rocky Welker is new to Sioux Falls and he’s excited to get to know the community! He looks forward to meeting you and talking about what Habitat means to you. As our new Executive Director, he’s energized to explore new ways to partner in strengthening our community. He’s hit the ground running! We are excited to see what the future holds with Rocky at the helm.

He moved here with his wife and daughter from Sioux City. He served as a Development Director at UnityPoint Health – St Luke’s Foundation. Prior to that he was the Executive Director at Big Brothers Big Sisters of Siouxland. He cultivated meaningful relationships, developed fundraising campaigns, and led staff. We know his skills and talents will be well utilized at Habitat Sioux Falls.

When asked how Habitat’s mission resonated with him, he spoke wistfully of his daughter. “You always want better for your children,” he said. As a new parent, he can’t imagine not being able to provide the safety and stability she needs. Providing strength, stability and self-reliance through shelter is Habitat’s mission! “It’s a big deal to be part of that transformation for people,” he said. We couldn’t agree more.

Rocky’s resourceful, team oriented energy is infectious. He finds personal fulfillment in being an “instrument of change,” empowering donors and volunteers to explore their interests and achieve their dreams through Habitat. While earning his Master of Public Administration degree at the University of South Dakota, he acquired an appreciation for employing a number of approaches to address a situation. He’s motivated to collaborate with Habitat staff and leadership, homeowners and home sponsors.

Join us in welcoming Rocky to Habitat Sioux Falls. We think he’s a great addition to our passionate, caring team!

Rocky pictured with his wife and daughter, July 2018 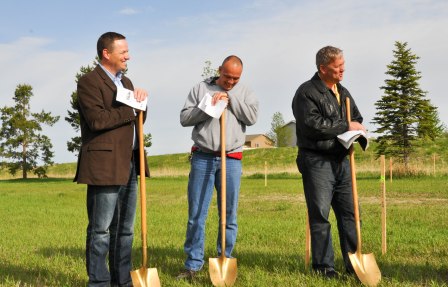 We are proud to introduce Paul Johnson, the new Construction Manager at Habitat Sioux Falls (pictured on the right, in the center). He started in April and hit the ground running. We had some clean-up from the 2013 season, which he addressed. Now we’re moving on the 2014 construction season, mud and all. Paul ran a custom home building company and owned a lumber yard, prior to joining our ranks. You could say construction is in his blood. Paul’s ethics are apparent as you work alongside him. He was familiar with Habitat’s mission to build with those in need. He said that he has noticed a difference in volunteers’ drive, when he explains that the homes are paid for by the families and not given. And regardless of who’s doing the work, volunteers or partner families or the Master’s Builders, the bar is set at the same height. “It still needs to be done right, no matter who the customer is.” He is excited to see how this job and Habitat Sioux Falls grow. He has plans to add to the list of tasks that volunteers can complete. Training and information are the keys. We all have the opportunity to learn, share and grow at Habitat.

Mark Schlueter, Paul Johnson and Pastor Allen Kjesbo at the Get-n-Go House groundbreaking on May 21, 2014